A Glimpse of Yukon
by Carol Mowdy Bond

Prairie grasses carpeted the area, making Canadian County  home to part of the enormous Southern Herd of American bison or buffalo. For hundreds of years prior and up to at least 1870, the massive animals grazed, and the ground shook when they roared through the area. Groupings of buffalo wallows can still be found at several Yukon addresses.

And archeological sites show that indigenous people groups  remained in the area, even reaching back hundreds and thousands of years. Various of these Native American groups, especially known on the plains, navigated the area. And as part of Indian Territory's beginnings in the early 19th Century, the Choctaw, Creek and Seminole accessed the area and made the region their home. As well, the Cheyenne, Arapaho, Wichita, Caddo, Tawakoni, Waco, Hainai, Anadarko, and Kichai were close at hand by late 1866 to 1889.Curious about President Thomas Jefferson's 1803 Louisiana Purchase, various exploration parties traversed the Yukon region during the 19th century. 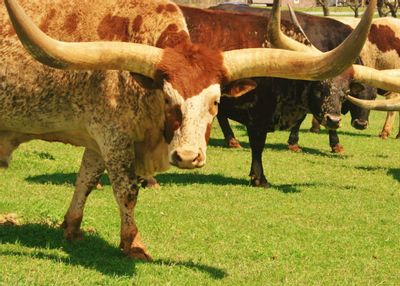 From 1866 to 1889, drovers and beeves on the Chisholm Trail, a cattle trail established in 1866, stirred up the dust and stench, rumbling through Yukon. Running from Texas to Abilene, Kansas, the trail passed through today's Yukon City Park. Drovers kept their eyes peeled for the park's five-acre Mulvey Pond, because it was the last spring-fed watering hole before reaching Abilene, and it was the last guaranteed water as they meandered through Indian Territory. Those buckaroos and herds navigated both the Canadian River, just south of Yukon, as well as the North Canadian River on which Yukon is perched.In 1890, federal law split Indian Territory into the Twin Territories with Oklahoma Territory in the west, and Indian Territory relegated to the eastern half. Both sides prepared for statehood.Through five land runs, and other means, Euro-American settlers claimed land in Oklahoma Territory. Yukon sat in the so-called "Unassigned Lands," and thus was opened to settlement via the Land Run of 1889. Settlers claimed their Yukon lands, and settled in, building their homes and farming their homesteads. (Not all of Canadian County opened via the 1889 land run.)As Texas cattle ranchers, cowboys, and entrepreneurs, the Spencer brothers, Augustus "A.N." Spencer and Lewis "L.M." Spencer, noticed today's Yukon area while driving their herds on the Chisholm Trail. Both  men invested themselves in Indian Territory's railroads, and they became cattle ranchers in Texas, riding up and down the Chisholm Trail with their herds. A.N. Spencer also had cattle in New Mexico and Kansas.

The Spencer brothers and their siblings built some of Yukon's first-of-their-kind buildings and created some of the first business enterprises, and many are located on Main Street. Various of the Spencer siblings quickly purchased land and erected buildings. At some point, A.N. Spencer managed to bring the Choctaw, Oklahoma and Gulf Railroad, or COG, later known as the Rock Island Railroad, through Yukon. And that was the pivotal catalyst for creating a bustling and prosperous Yukon. The small settlement quickly burst into a thriving hub of activity and a big draw for farmers, merchants, and businessmen. The original Feb. 17, 1891, plat of Yukon's town site shows the COG train tracks steaming through Yukon. The Yukon post office was established March 28, 1891. But the railway didn't chug through Yukon until April. Prior to that, mail came through other means. By late 1891, the Spencers and their associates splashed a flurry of growth onto the landscape, causing others to relocate to the area. And today's Main Street was originally known as Spencer Avenue. 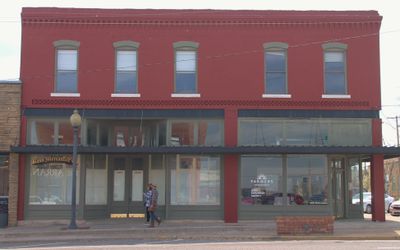 J.W. Walker's Saloon sat on the southeast corner of Main Street and 5th Street, and then the building became Townley Confectionery. But brothers Harry and George Bass razed the building, and built their new store at 456 and 458 W. Main Street on the site in 1898. Their Bass Brothers Grocery and Dry Goods, which became known as Bass Mercantile Company, was incorporated prior to Oklahoma's 1907 statehood. The Bass brothers sold pretty much everything you can imagine. George Bass' wife Emma Sanger Bass performed at Spencer's Opera House as a pianist.  The Corner Drug Store was housed in the northwest corner of the Bass Building. Besides the normal drug store type wares and prescriptions, they also had a popular fountain where locals enjoyed ice cream, sodas, and sandwiches. 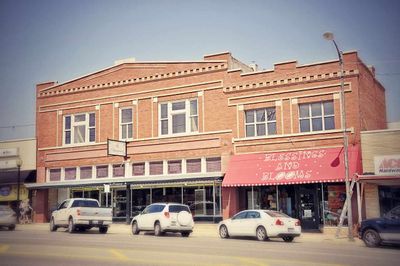 The Irish Mulvey twins, Odie and Mike, arrived in Oklahoma Territory as teens. In 1893, they moved to Yukon, only two years after the Spencer brothers founded the prairie settlement. The twins invested in a small grocery store on the south side of Main Street, and paid rent there. The Mulvey twins opened a building at 439 W. Main Street in 1898. Built in 1904, and known as "Yukon's Big Store," the twins' Mulvey Mercantile Company, 425 W. Main Street, rapidly expanded, eventually including half the buildings on the north side of Main Street between 4th Street and 5th Street. Contributing greatly to the growth of Yukon, the business was the largest retailer in Yukon until the 1930s. Some claim it was the largest retailer in Oklahoma. Families involved in the business, and some who owned parts of the buildings at times, include the Wheatleys, Turners, Basores, Whelans, Pribyls, Anton "Tony" Kirkegard, Sue Leach, and Lara Davis.
Between 1898 and 1902, a large Czechoslovakian population was gravitating to Yukon. Called Bohemians at the time, that population mushroomed, and today Yukon is known as the Czech Capital of Oklahoma.With the county's largest settlement of Czechs spanning from Yukon to Mustang, Czech Hall, previously known as Bohemian Hall, is a national landmark. The first building was erected in 1901 to house two lodges, the Sokol Lodge and the Western Fraternal Life Association. By 1925, dances were a weekly event, and the hall still serves as the center of Czech-American culture.
In 1902 or 1903, John Kroutil and his brother Frank Kroutil, and A. F. Dobry, all of Czechoslovakian heritage, purchased a small coal business that also handled some wheat and corn. In so doing, they acquired the small grain elevator and mill that were built in 1893, giving birth to the Yukon Mill and Grain Company. John Kroutil became president of the mill, with Frank Kroutil as the vice president.

John Kroutil and Frank Kroutil installed steam-powered electric generators to run the flour mill. The generators were really big, allowing Yukon to be one of Oklahoma's first small towns to enjoy electricity. John Kroutil served as the president of the Yukon Electric Company, which was formed in 1907, the year of Oklahoma's statehood. In 1960, OG&E bought the rights to provide Yukon's electricity. 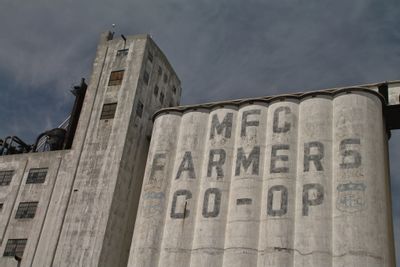 Over time, the Kroutil brothers cranked up their operations. The mill became the largest flour plant in the state and the Southwest, and by the 1930s, had the capacity to produce 2,000 barrels of flour per day. And from the Yukon area, they exported "Yukon's Best Flour" to every state in the U.S., and to some locations abroad. During World War II, the mill shipped flour to Amsterdam, Holland. The Dobry family sold out to the Kroutils in 1933. And A.F. Dobry and family founded Dobry Flour Mills across the street, on the north side of Main Street, where they produced Dobry's Best Flour. Throughout the 20th century, the Kroutil and Dobry operations transferred into different hands. But the grain elevators are still in use today. 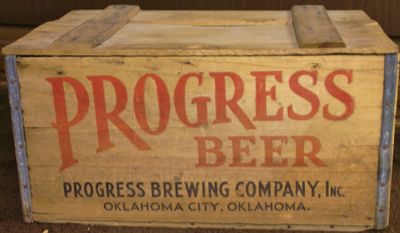 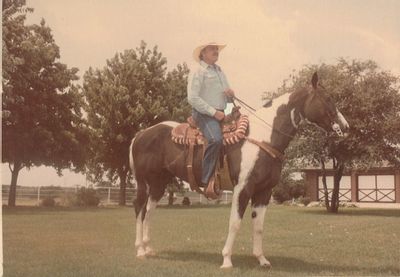 One of Yukon's favorite sons, Dale Robertson (1923-2013) was periodically spotted by locals around town and in Yukon eateries. Calling Yukon his home, Robertson was a popular and well-liked personality. Starting in 1946, he enjoyed a 60-year-career in television and movies, especially Westerns. Robertson always said he worked as an actor so he could save money, with a goal of owning his own Oklahoma horse ranch. And he did just that. He delighted in his Yukon Haymaker Farm. Robertson loved riding. He bred horses, and said he had five world record holder horses on his Yukon ranch. Robertson's land is now owned by another family, and is part of a working cattle ranch. Another of Yukon's favorite sons, country music icon Garth Brooks, has nabbed several Grammy Awards along with numerous other accolades. Brooks grew up in Yukon, and his previous home is often called the Graceland of Yukon. He played football and baseball and ran track, and he was graduated from Yukon High School in 1980. And Yukon even has a Garth Brooks Boulevard! 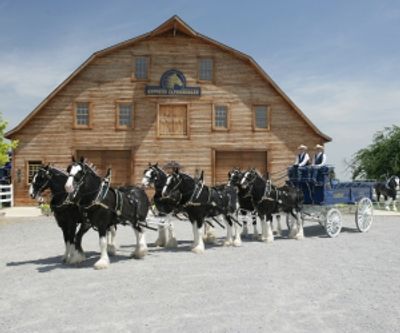 With his co-founder, Robert A. "Bob" Funk's Express Employment Professionals generated gross revenues of $2 million during its first year, 1983. Located at 2202 N. 11th Street in Yukon, Funk's Express Ranches is the largest producer of registered seed stock Angus. His famous Clydesdale horses tour the nation. And he owns a team of world champion Percheron horses.
Controversy remains about both the original spelling and origins of the name Yukon. But state historians believe the city is named after Alaska's Yukon River. Originally labeled as Spencer Avenue, Yukon's Main Street is also known as Route 66. The iconic and well-traveled highway draws tourists from around the globe. With a diverse demographic, Yukon continues to thrive and create history. And the future looks bright!

For questions or more information...